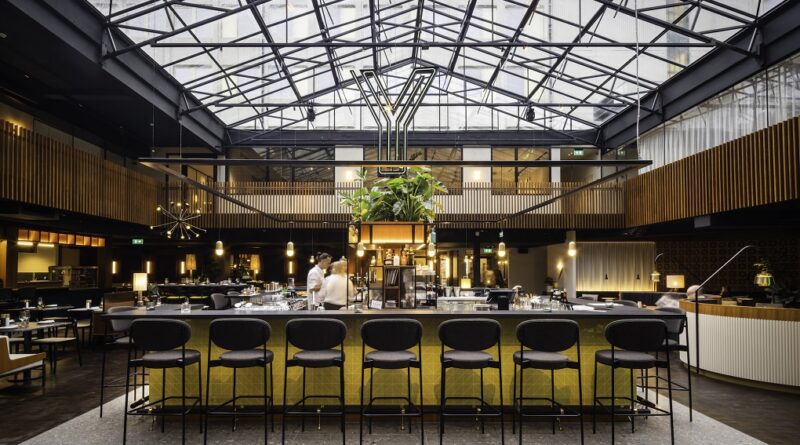 A major eye-catcher is the gigantic greenhouse roof, which covers everything (All images: Purelations)

In the centre of Ghent (Belgium), at the Brabantdam, the Yalo Urban Boutique Hotel opened its doors at the end of last year. 92 design rooms, a cocktail and wine bar, a foodie restaurant, urban jungle meeting rooms and a rooftop bar with a 360° city view alone make Yalo worthy of an article, but there is more than that. The fact that this hybrid hotel concept is inextricably linked to a ‘du jamais vu’ approach in the Belgian hospitality scene is what makes it so special. The entire concept was guided and drawn up by King George, a full-service creative agency.

The outside world is charmed by the Yalo concept. This was recently demonstrated during the presentation of the New Hotel Awards 2022 in Antwerp (Belgium), where a professional jury proclaimed the design of the four-star hotel Yalo ‘Best New Hotel Design 2022’. To top it all off, Yalo also received the award for ‘Best New Hotel Bar 2022’. The award rewards four years of work by King George, based in Belgian Sint-Niklaas. How the agency approached everything, from interior design to strategy, copywriting, PR and much more, is explained by King George creator Nicolas Block, a fellow interior, design and lifestyle journalist at Actief Wonen over a decade ago.

The whole story starts with Joris Van Duffel, owner and CEO of the Ghent project development company ‘UrbanLink’ and also wine grower at the ‘Nobel’ wine estate in Lochristi, near Ghent. He and his wife, Laurence De Kerpel, fall in love with the former shopping centre ‘Braempoort’ in the centre of Ghent. He decides to transform it into Yalo, a versatile, accessible and vibrant meeting place that welcomes and connects everyone.

What it comes down to is turning an insignificant non-place into a complete hotel concept. In doing so, the design mirrors a trend that has already been seen in major cities such as Paris or London. It is looking in the direction of hotels that offer trendy restaurants and event spaces, which are clearly also aimed at non-hotel guests.

To achieve something similar, King George was approached since they had already realized such projects in the past. Their headquarters in Sint-Niklaas (there is also a branch in Amsterdam) is the best example of this. In a former carpet factory, King George built their own story, including their own lunch and event café, right under the office building that was named the ‘second most beautiful interior in the world’ at the World Interior Awards in London in 2018.

“Our agency must reflect creativity. Those who, like us, profile themselves as a Benelux agency in interior, design, architecture and food, developing digital and physical stories for companies in the areas of (digital) marketing, public relations, socials, graphic and web and interior design must radiate this themselves,” testifies creative director and owner Nicolas Block of King George. “For the elaboration of the project, they came to us, and we had a lot to fill in. The actual briefing was: I want to start a hotel, but I’m not sure which, and I have no idea about the positioning, name or interior. So we could start from the ideal starting point: the strategy.”

The future of hospitality is multi

“What is striking is that hotels abroad have become real ‘destinations’. They are decorated in such a cool way that they want to be seen, whether you are looking for a place to sleep or not. This is exactly what we wanted to achieve with Yalo in the heart of Ghent. Yalo was not to be a pure hotel, restaurant or meeting venue, but everything shaken up into a hybrid cocktail that tastes like more. We’re doing more than just winking at the future of the hospitality industry, which is multi, also in Belgium.”

Yalo asked us to create a complete hotel concept, with all the trimmings.

“We went all the way in terms of experience and design, so that it would have a 24 hours a day existence. The visitor can see this in a place that can be breakfast, aperitif, dinner and club, where hotel guests stay to eat and locals would almost forget that Yalo is actually a hotel.”

“Because this was a totally new concept, we had to dig deep enough at the start to give the final result a solid foundation and to put a complete concept on the market. In doing so, we literally tackled everything: the Brand and Marketing Strategy, Digital Strategy, Content Marketing, Brand Activation, Corporate Identity, Web and Motion Design, Social Strategy and Content and Campaign, Web Development, Email marketing up to and including press relations, photo shoots and copywriting. Not to mention the interior design, of course!”

This renovation project, in which a banal place from the 1980s had to be turned into a total concept, posed a big challenge. Especially if you wanted to incorporate a hotel, restaurant and bar with a rooftop that could be harmoniously reconciled. The interior design was no easy task to turn this concept into an attractive place that appeals to locals, business people and tourists alike.

“The central point of the design is that everything in Yalo must be multi-functional, which makes it so unique,” explains Nicolas Block. “If we first look at the hotel function, we can see that for the 92 rooms five design concepts have been drawn up that are used interchangeably. This means that guests are surprised every time they visit the hotel. The furnishing is also hybrid. It is not just about vintage or design or luxury, but everything together in a balanced mix. The branding is also repeated throughout, from the main colours gold and dark green to some secondary colours, such as terracotta red and ochre yellow. This gives the interior a ‘retro mid-century vibe’.”

Restaurant and bar as the biggest challenge

The restaurant and bar were the biggest challenge. Every visitor had to feel at home.

“Everything had to be seamlessly linked,” says interior designer Soo Heyvaert of King George. “The flex worker might prefer to sit a bit higher and wants to be able to work in silence, while a group of friends like to chat over an extensive lunch. The spacious atrium made it difficult to make the best use of this division, but by strategically placing the furniture, open and closed seating areas were created.”

The incidence of light is striking in Yalo. Large windows let in the Belgian cold , white light, which did not always make it easy to create a warm setting. Through the materials used (furniture and lighting groups) and by working with levels (i.e. without walls or partitions), a living room feeling was created on a large scale. The bar in the middle acts as a compass, without losing sight of the imposing atrium.

“The end result is a design style with a mid-century design touch, but reduced to a modern and innovative concept. Without losing sight of the architecture and refinement,” says Soo. “Everything here is free from clichés. The final picture was not created by decorating all over, but by measuring every square metre architecturally. We didn’t decorate for the sake of it, the aim of the decoration was merely to finish off the already strong interior.”

To conclude, we’d like to look back on the hotel award together with Nicolas Block. Being proclaimed the best hotel design for 2022, what does that do to a person?

“Being rewarded for four years of hard work, pushing the boundaries of the Belgian market with this hotel both in terms of concept and interior, is of course more than gratifying. And don’t forget that it is actually a crowning achievement for all the new Belgian hotels built in 2020 and 2021 (winks). To subsequently receive the ‘Best New Hotel Design 2022’ award….”

“In terms of interior design, we have beaten big names such as Radisson, Van der Valk or Marriott, but what is perhaps most pleasing is that the jury praised our agency for its innovative outlook on the hotel scene, with a design that is a mixture of luxury, rock ‘n’ roll and a touch of vintage. We gave each of the 92 rooms its own identity, and these rooms were interpreted differently throughout the entire hotel concept. We are currently working on the Yalo Rooftop Bar, which will open its doors later this spring.”

So how does Nicolas Block look back on the whole thing? Can he summarise Yalo in one single paragraph?

“With Yalo we wanted to create a cosmopolitan place that could just as well be in Paris, London or Tel Aviv. Designers had never before managed to create a unique mix of locals, business people and tourists in a hotel concept in Belgium. Six months after the opening, we can establish that Yalo is a restaurant and bar with a hotel, and not the other way around. And you can call this a unique achievement on the Belgian market, I say this without blushing!” 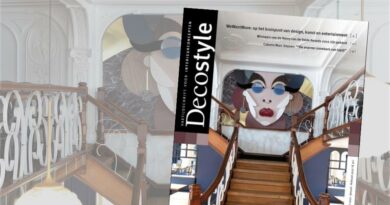 The digital English version of Decostyle 87 is waiting for you. Click here to get your free digital download. In the Decostyle 87 we introduce you to a design story about WeWantMore, present a trend story about carpet by our columnist Marc Geysen, take you along to a stunning project

Collectible, an international fair for 21st century ‘collectible design’, announces its fifth edition. It will take place from 20 to 22 May 2022 at the Vanderborght Building in Brussels. 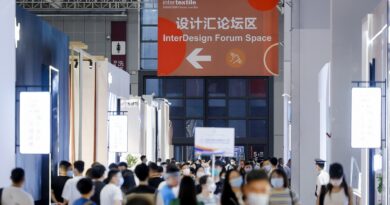 In light of the current pandemic circumstances in China, the 2022 edition of Intertextile Shanghai Home Textiles Autumn will be deferred. The Autumn fair, which was originally scheduled to be held from 15 – 17 August at the National Exhibition and Convention Center in Shanghai, will now take place in